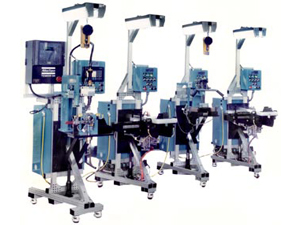 These stations allow for easy operator assisted assembly of the folded bag, attachment bracket and decorative cover to be assembled with precise control of torque, bend force, and bag folding accuracy.

Consists of at least one each of a NUTDRIVER WORKSTATION, CUSHION FOLD WORKSTATION, and a COVER PRESS WORKSTATION. The Nutdriver station consists of a fixture for manually loading a bracket with inflater and airbag attached to it and a nut driver to drive a retaining nut to a prescribed torque. The Cushion Fold station consists of a folding rack to manually load, and automatically fold the bag in a prescribed manner. The Cover Press station consists of a nest into which a decorative cover is placed and a folded bracket-inflator-bag assembly is manually placed into the cover. The cover flaps are manually folded into position and retaining tabs on the bracket are bent into place by a press. Part tracking is accomplished at each workstation by reading a bar code label prior to performing the function of the particular workstation. Parts are manually offloaded at all workstations.