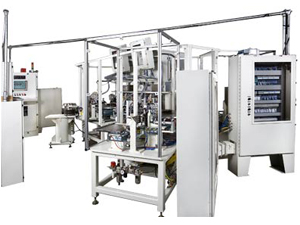 This machine is used to load powder into the Igniter Can and insert and press an Igniter Header into the can. Cans are bowl fed from a 10” CCW feeder bowl through an inline feeder track to a dead track where they are picked up by a 4 Station vacuum head oscillating turret and advanced through a can weigh station and an idle station and placed into a nest on a 16 station cam driven index table. The pre-weighed can is indexed to the powder load station where a spoon is automatically moved into a protective barricade where a feeder bowl gravimetrically fills it with powder.

It is scraped off level while exiting the barricade and the powder load is dumped through a funnel into the can. The powder bowl barricade is built to withstand an explosion of many times as much powder as is allowed in the bowl and direct the blast up through the roof. The powder filled can is vibrated to level the powder and picked up by a dual head oscillating parts placer and placed on a load cell weigh station. Simultaneously a weighed powder filled can from the previous cycle is placed into the index table nest.

Bridged headers from the bridgewire welder are track fed with the pins down thru the production line track system to a dead track where they are picked up by a dual head oscillating parts placer and flipped 180 degrees and placed into the proper weight powder filled cans. The headers are then seated to a desired height in a press station. Good parts are offloaded into an inline feeder track for further conveyance down the production line track system. Reject parts are offloaded through a tube through the table top into a reject part bin.