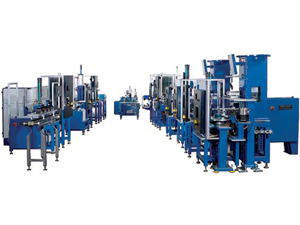 This assembly cell, of semi-automatic operator loaded machines, produces a range of single stage air bag inflators. The assembly cell is arranged in a “U” shape and single part flow is maintained through the process. A supervisory control and traceability system coordinates the cells and collects important assembly and test data. The system starts by applying an in process bar code label to the upper housing and then resistance welding an orientation pin to the housing. The next operations press an ignitor retainer into the upper housing, and laser welds it in place. An ignitor is then loaded and crimped in into the retainer, and a shorting clip is installed. At this point, an enhancer charge is dispensed by weight and loaded into the retainer and is closed up by crimping a sealing disk in place.

The next operation presses a wire mesh filter into the upper housing, which is then filled by weight with a gas. The filter cavity is then sealed by pressing a sealing disk into the filter. The next operation applies a burst seal to the inside of the lower housing, and then the upper and lower housings are brought together and friction welded. The upper/lower housing sub-assembly is then pressed into a flange and the flange is subsequently laser welded in place. The orientation pin is also broken off at this point in the process. The fully assembled inflator is then leak tested, electrical tests are performed, and the finished units are labeled and packed out.