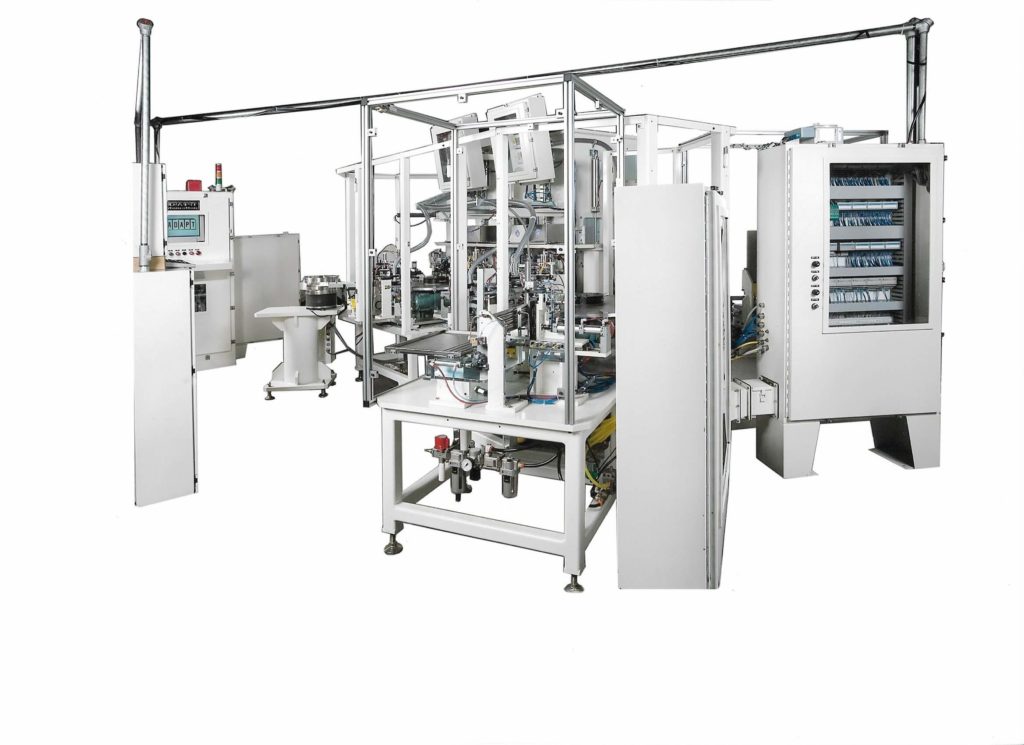 The Enhancer Cup loading machine is a standard ADAPT dual “Fill by Weight” loading machine. The machine is automatically loaded and unloaded in its operation. The machine transfers the Cup through several assembly processes where it is “Dimpled” to control Cap height, pre-weighed, filled, post weighed, capped and finally roll crimped, completing the assembly. The Loaders are designed in accordance to standard explosive safety requirements.

The Cup are automatically loaded into the nest on the rotary indexer by a standard ADAPT Automation pick & place device. The Cup is checked for proper loading in the nest by end of travel sensors. If the Cup is not present, or missed loaded, the machine will not process any further operations on that nest, and it will be cleared at the offload station

Once the Cup is loaded, a dimple die lowers down around the perimeter to a fixed height, where the side walls will have 8 ‘dimples’ swaged in place. This will set the finished height of the Cap as it is inserted down into the Cup after the Granules have been loaded

The Cup is lifted up from the nest by an electronic microbalance Sartorius scale to record the weight before the Granule loading process begins. This measurement is used to verify the correct Granular weight was transferred into the Body.

After acquiring the tare weight of the Cup, it is transferred to the Granule load station. The Granules are hopper fed to suspended cups on Sartorius weigh scales. The weight is recorded and if acceptable, dispensed down into a funnel that has seated onto the Cup that has been elevated up from the nest. If the load is out of specification, it is dumped into a reject container. ADAPT’s standard tapping action is used during the dispensing to help pre-settle the load. Once the granules are dispensed and the Cup is deemed “good”, it is then disengaged from the funnel and lowered back down into the nest. It is then transferred over and lifted up by the same type of electronic microbalance to record the final weight. This check verifies that the entire pre-weighed load made it into the Cup.

The Cup again is lifted from the nest by an electronic microbalance Sartorius scale to record the weight after Granule loading. This measurement will be used to verify the correct weight of granules were transferred into the Cup.

The Cap is transferred from the feeder system and inserted down into the Cup resting in the nest. The loading device is equipped with an LVDT gauge to verify that the Cap was properly inserted into the Cup. If the insertion depth is out of tolerance, the part will not be roll crimped at the next station and it will be diverted at the offload station to a lockable storage container.

A standard roll crimper lowers down onto the Cup and starts the crimping process to create a complete roll over of the Cup into the Cap.

All completed, incomplete, or rejected assemblies will be removed from the nest and placed into a discharge chute that directs them to the proper offload container. Diverters in the chute will separate the good assemblies from the bad by using sensors to verify the proper offload of each into one of three containers. One container will be lockable that holds the Cups that have had granules loaded into them. The other two will be containers to hold acceptable Enhancer Cups, and incomplete ones.