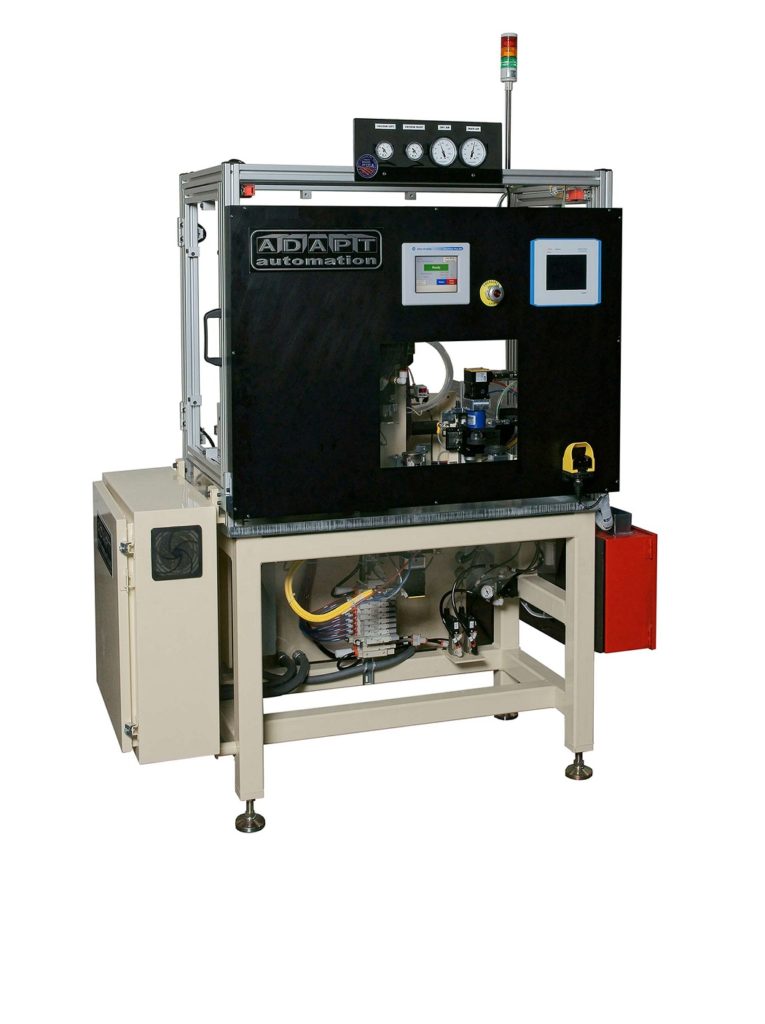 The machine will operate as a manually loaded station that automatically verifies Cap hole presence and applies the Stainless Steel Shim Tape to the specified location and with the specified 68N/cm2 force. This machine verifies the number of holes in the Cap and then applies Shim Tape on the inside, covering up the holes. The Cap are manually loaded into a lower spindle nest and oriented by a set of sensors that verify the holes as the Cap is rotated using a stepper motor. This will allow the Cap to be positioned correctly for the engagement with the tape applicator resulting in the correct final positioning of the Shim Tape. The
housings are manually loaded and removed by a single operator. The Stainless Steel Shim Tape is automatically fed from a reel.

The seal tape comes on a backing strip that allows it to be fed properly. The backing strip is then rewound back up for easy disposal of the scrap. The operator removes the previously Taped Cap and replaces it with one that is ready for Shim Tape. The operator is responsible for placing the part into the good bin or down a reject bin. The reject bin haves a photo sensor that will detect the rejected part and not allow the machine to function until the rejected part has been placed into the reject bin, assuring traceability. The operator is protected from the assembly automation by a light curtain and dual Opto-switches. Along with the operator working area, the entire system is guarded with fixed and access panels. All access doors are interlocked to assure safety for the operators and maintenance personnel. Once the machine cycle has been activated, a de-reeling servo

The material is pre “Kiss” cut to length, allowing for an exact length of tape to be picked every time. The system removes the tape off the backing using a
standard aggressive bend at the point of removal. This allows the taper to initially extend towards the vacuum head where the rotation and vacuum will acquire the Tape for transfer by the insertion head. The vacuum head then shifts over the nested Cap, lowers and applies the Shim Tape to the ID of the Cap that has been pre-oriented by sensing the side holes. Both an upper and lower servo motor work in unison to apply the Shim Tape to the inside of the Cap. The Shim Tape is applied to the inside of the Cap covering the holes to your specification. The heads roller assembly firmly presses the Tape to the Cap wall to 68n/cm2
force requirements. This final required force is applied to the tape via the roller after the two lower force tape application rotations of the Cap.