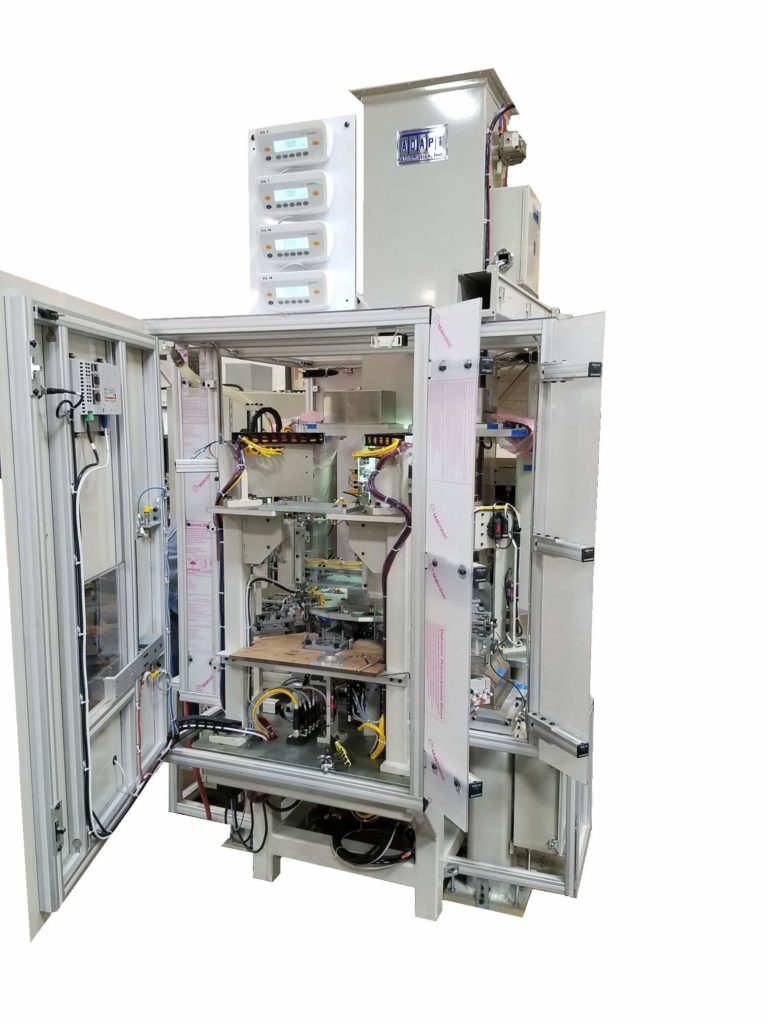 The Closures are manually loaded into guided gravity tracks. One track are for the Closures with a round style initiator collar, and one track for the Closures with the flat on the initiator collar. When the Closure arrives to the dead nest at the end of the track the Laser mark is scanned from underneath to identify the style of Closure (round or flat collar) and track it through assembly process. If the wrong Closure is identified in either track it is pushed from the track into a reject box. The Closures are then automatically loaded into the nest on the rotary indexer by a standard ADAPT Automation pick & place device. The pick & place continuously alternates back and forth between the two tracks when loading the Closures into the nests. The Closure is checked for proper loading in the nest by end of travel and/or part present sensors. If the Closure is not present, or not properly loaded, the machine will not process any further operations on that Closure, and it will be cleared at the reject station.

Before the Granule loading process begins the Closure is lifted from the nest by a (2) axis, rotary pick & place and transferred to an adjacent electronic microbalance Sartorius scale to measure and record its weight. This measurement is used later to verify that the correct Granule weight is transferred into the Closure at the following Granule dispense station. Once the weight is measured and recorded, the rotary pick & place returns the Closure to the nest on the indexer.

3. Granule dispense, limited vibration during and after dispense

After acquiring the pre-weight of the Closure, the Closure is indexed to the Granule load station. The Granules are hopper and vibe track fed into cups suspended from Sartorius weigh scales. Once the target weight is reached, the feeding stops and the final weight of the load is recorded and if acceptable, the load is dispensed down into a funnel that has seated onto the Closure that has been elevated up from the nest. If the Granule load is out of specification, the diverter funnel swings to the reject position and the tablets are released down the reject chute into a reject container. ADAPT’s standard tapping action is used during the Granule dispensing to help pre-settle the load. Once the Granules are dispensed and the assembly is deemed “good”, the Closure is then disengaged from the funnel and lowered back down into the nest on the indexer.

Once the Granule loading process is complete, the Closure is indexed to the post weigh station where the Body is lifted from the nest by a (2) axis, rotary pick & place and transferred to an adjacent electronic microbalance Sartorius scale to measure and record its weight. This measurement will be used to verify that the correct Granule weight was transferred into the Closure at the previous Granule dispense station. Once the post weight is measured and recorded, the rotary pick & place once again returns the Closure to the nest on the indexer.

The Cap is transferred from the vibratory bowl and track system and loaded into the upper press tooling by an ADAPT pick & place. Once loaded, a pneumatic press will be activated to Press the Cap down to its final location. The force applied by the Press is verified with a load cell while the final height will be confirmed with an LVDT gauge.

Acceptable assemblies are removed from the nest and placed onto one of two guided chutes or conveyors that deliver them to either Line A or Line B, based on their style. The open assemblies flagged as rejects for post weight are picked up and rotated over a reject Granule funnel located between the offload station and the off-load conveyor which directs the Granules into a specified lock box. All other reject are automatically rejected down an adjacent sensor monitored reject chute by an ADAPT pick & place.