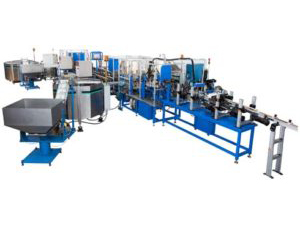 Seamed cylindrical pack elements are pressed down 2 up through the curing fixtures into fixtures on a 3rd 16 station cam driven index table. Center Tubes are hopper and bowl fed through a dual inline feeder track to a dead track.

Tubes are picked up and rotated 90 degrees and placed 2 up onto lower rams which have been raised up through the center of the seamed pack elements. Upper rams lower engaging the top of the center tubes then forces both rams and center tubes down, placing the center tube in the desired position inside of the seamed pack elements. Seamed Pleat Pack Elements with Center Tubes are pushed 2 up down into jaws on a dual part fixture on a 52 position cam driven indexed carousel. First End Caps are hopper and bowl fed through a dual track where they are rejected if bad otherwise they are filled with a measured amount of Plastisol Epoxy and placed under the Seamed Pleat Pack Elements with Center Tubes. The First End Caps are pressed onto the Seamed.

Pleat Pack Elements with Center Tubes and transverse across Induction Heaters to cure the Plastisol. The fixtures are rotated 180 degrees and the Second End Caps are placed and epoxied onto the Seamed Pleat Pack Elements in the same manner as the First End Caps. Completed Inner Element assemblies are offloaded onto a conveyor for further conveyance down the production line. Reject assemblies are offloaded into a reject chute.Good parts and bad parts are unloaded at the same station and are sorted into plastic jars by multi-position parts placer that moves over a system of drop tubes.