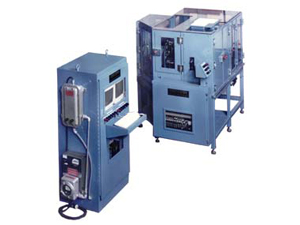 A cam driven rotary indexer transfers headers through multiple stations that load and consolidate charge powder into a pocket of a charge sleeve welded on top of the header over a bridge wire.

This machine is used to fill a Charge Sleeve on a Header with an Ignition Charge of powder, fed by volume. Typically the Headers come to the machine directly from the Charge Sleeve Welder. The machine is built around a 12 station cam driven index table. The Tooling at each position on the index table consists of a heat treated and polished funnel and a spring-loaded arm used to hold the Header. At the first station, the Headers are fed from the plastic tube they were loaded into on the Charge Sleeve Welder with the pins hanging down. The clamp arm on the fixture is opened and the Headers are moved in under the funnel and roughly located. The clamp arm is then released to hold the Header in the fixture. At the second station, the clamp is released slightly and a precision pin with a small lead in chamfer is lowered through the funnel and into the hole in the Charge Sleeve, aligning the funnel near perfectly to the hole in the Charge Sleeve. The Headers and Funnel Tooling is indexed to the powder load station where a spoon is automatically moved into a protective barricade where a feeder bowl fills it with powder. It is scraped off level while exiting the barricade and the powder load is dumped through the funnel into the waiting Charge Sleeve.  The dumping process is a flip over of the spoon in a circular, offset motion to  “throw” the powder out, as it can stick in the spoon if just turned over. The powder bowl barricade is built to withstand an explosion of many times as much powder as is allowed in the bowl and direct the blast up through the roof.  It also contains a system that allows the operator to load velostat containers of bulk powder in a secondary barricade which is then automatically transferred to the powder feeder bowl after the outside door is closed. Once the powder load is complete, the Header and Funnel Tooling moves to the Consolidation station and the final heavy consolidation is done. All of the parts are removed at the unload station into an offline powder height check station. Here a precise differential measurement is taken from the top of the Header to the top of the Ignition charge.  Good parts are then transferred onto a vibratory inline feeder for transport to an output loading machine. Reject parts are unloaded and placed into an appropriate explosive material container. Optionally another approach that loads the Headers from the top into a collet and then moves a slide mounted funnel in over it is also available.