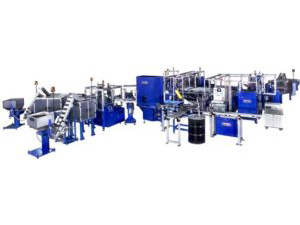 A complete system of multiple machines producing end caps that are laser welded along with filter elements plastisol bonded, producing a finished metal fuel filter, with fittings, at a rate of 40 parts per minute.

This system assembles several sizes and styles of base plate/fitting/element/end cap sub-assemblies for fuel filters. The first machine in the system feeds and loads the filter base plate and then feeds, loads and presses either a nut or a barb fitting into the filter base plate. This base plate sub-assembly is then fed into a laser welder that penetration welds the two parts together. The welded sub-assembly is then fed by a conveyor system to a final element assembly machine where it is flipped over and loaded into a nest, then filled with Plastisol. Another machine feeds the end cap into a carousel inline machine and fills the end cap with Plastisol. These filled end caps are then advanced to a station where an operator inserts the filter element into a transfer block over the end cap. The machine pushes the element into the end cap and verifies that the proper element was inserted and it is fully seated.

The end cap/Plastisol/element sub-assembly is then passed over RF heating elements to cure the Plastisol. This sub-assembly it then flipped over and inserted into the base plate sub assembly on the final assembly carousel. The finished sub-assemblies are then pushed into an eight-lane conveyor oven to cure the Plastisol. On the other side of the oven, the parts come out in rows of eight and are raked off the conveyor and sent in a single file line to a sealant application station. Each base plate is rotated and gets a ring of sealant dispensed around the rim. The sub-assemblies are then fed into a cam operated flip over station where they are turned over and placed into cans traveling down a conveyor in plastic pucks. The flip over station uses a timing screw to separate the pucks on the conveyor and stop one under the flip over arm so the base plate/filter sub assembly can be placed into the can. A similar station just upstream of this station loads the cans into the pucks. Once the can and base plate/element sub-assemblies are in the puck they go down the conveyor line to be seamed.