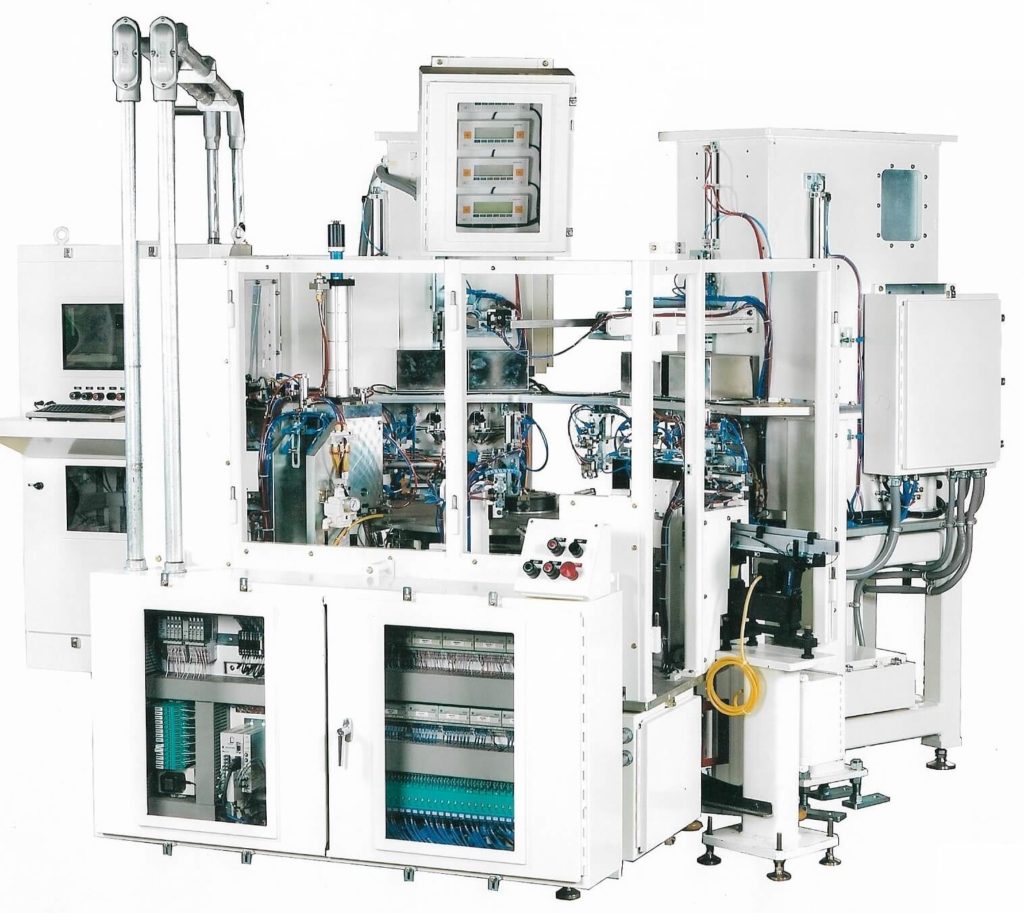 Micro gas Generators are fully assembled on two rotary indexers. One prepares the Holder with an Igniter, while the other loads the Generate into a Cup and seals it off with the completed Holder from the previous indexer. The Holder is manually loaded onto a vibratory inline feeder where it is transferred and loaded down into the nest at station one. The nest have a poke-a-yoke feature to orient and lock the holder with respect to the two shorting clip slots. The Holders are rotated until the feature line up with each other and seats into place. “O”-Rings are manually loaded and transferred on a vibratory inline feeder system to a pick & place device and inserted down into the Holder. End of travel sensors and part in place sensors detect the presence and the seating of the “O”-Ring into the Holder. If there is a discrepancy, the nest is flagged and no further assembly sequences will take place on that assembly and it will be removed at the reject station. This insures the “O”-Ring is in place before the Squib is loaded and crimped into place. The Squib is manually loaded and transferred on the inline feeder system and loaded down into a fixture that raises up through the nest, Squib Holder, and “O”-Ring. The nest has a feature in it that checks the orientation of the Squib ground pin. If in the correct location, it lowers back down into the nest. If it is 180 degrees out, the fixture will rotate 180 degrees and then lowers the Squib back down into the Squib Holder. This makes sure that orientation of the Squib is always in the correct position. Normal required load force is 800N to 5000N. The crimping of the Holder incorporates an air over oil press that lowers tooling down onto the top edge of the Squib Holder. The tooling incorporates an inner plunger that puts pressure onto the Squib to seat it before the crimp tooling performs the crimping operation. The nest is supported from underneath to transfer the load from the indexer top plate and hold it firmly for accurate crimping. The crimp head is coupled to an LVDT that will measure the crimp height and use it for disposition of the assembly. The Cups are processed on the next dial to load the Generate and seal it with the Squib Holder. The Cups are manually loaded onto a linear vibratory inline feed track that automatically feeds them to a dead nest where a pick & place device transfers them to the indexer. The automatic feeder system feeds and orients the Cups in the correct orientation for proper transfer into the nest. The pick & place device checks to make sure that the cup has seated all the way into the nest by the use of end of travel sensors that not only detect that there is a part present, but also that it has seated all the way into the nest.

The empty Cups are then weighed to check the empty status to be used to check the load later on in the process. ADAPT’s dual weigh and feed dispense system pre-weighs the propellant before discharging it into the Cup. The indexer lowers the Cup onto a platform that supports it and accepts the load from the dispense system. Two weight scales with suspended cups captures the propellant as it is fed from the hopper into a diverter that switches back and forth between scales. While one is weighing the propellant, the other is being deposited into the waiting cup through a funnel and tube system. If the fill is out of specification, it is transferred out of the path to the cup and into a collection bin for manual transfer back to the feed hopper. The hoppers are equipped with low level sensors used to alert the operator when it is running low. The fill specification when running one type of material is +10 mg on a 200 mg load being +5%. All larger size loads are also at a + 5% load tolerance. The fill volume changes are supported by an ADAPT Automation ‘Auto-Tune’ system for dialing in the correct amount. Accuracy’s are able to reach a tighter tolerance depending on the load amount. The system then checks the weight to verify the load has been accepted and another load is processed in exactly the same method as before. The final weight is checked before inserting the Squib Holder into the Cup and crimped in place.