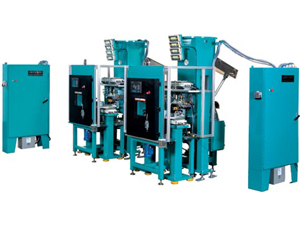 This manually loaded assembly machine dispenses propellant tablets by weight into either the first or second stage of a dual stage air bag inflator. The two stages of the inflator are composed of separate cups, with a 60/40 split, that contains their own enhancer and gas generate loads. These two cups are then joined later in the process to form a round dual stage inflator.

The fixtures on the machine are made to accept either of the two cups and the machine can even run mixed batches of the two cups. The operator loads the cup and the appropriate sealing plate at the first station of the machine. The cup check weighed before and after the load to verify that the entire pre-weighed load made it into the cup.