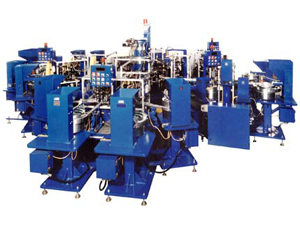 This system of machines is used to produce a planetary gearbox used to drive an oscillating sprinkler that uses water flow as it’s power source.  The Gearbox contains 24 separate parts of 12 different types.  The exploded view shows how all of the parts fit together.  The system is composed of  3 Sub Assembly Machine, 1 Final Assembly Machine and 1 Test Machine.  The system is fully automatic, so all parts are fed from vibratory feeder bowls and are equipped with hoppers.

The system is made up of  several sub assembly machines feeding one final assembly machine.  This was done because the sheer number of parts in the complete assembly would make it very difficult to achieve a high assembly efficiency. If all of the parts were loaded on one machine, any failure to load any part would result in an incomplete assembly. This means that the overall efficiency of the system would be calculated by multiplying the efficiencies of each individual station.  This means that if each of the 24 parts was loaded at 99% efficiency the overall efficiency of the machine would be 78%.

The upper tool plate then moves up with the part to be loaded and rotates 15 degrees in the opposite direction to position the pick up tooling over the turret fixture.  By this time the turret is in the dwell position and the tool plate moves down and deposits the part in the fixture.  The heart of the final assembly machine is a cam operated indexer with two overhead tooling plates.

Once all of the sub assemblies are loaded, the cap & turbine are snapped on and the pinion gear is meshed with the top set of gears.  The finished parts are then unloaded by a cam operated parts placer into a test machine that spins the turbine (4 up) and checks for the prescribed amount of movement of the output shaft.