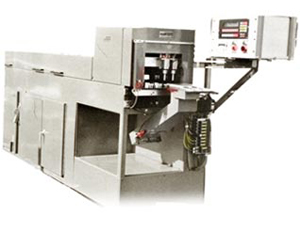 This machine is a dual track, two up, automatic thermal switch pre-heat, to a precise +/- 1 degree F, transfer to a return track to minimize floor space, under the test and calibrate heads, to the dual pointer assembly mechanisms to two discharge tracks. The parts travel over a rejecting gate which is capable of rejecting each individual track and deposit the switch in its respective reject condition box.

Two switches are placed in their locating nests and identified by the proximity switches, two pointers are placed in the vacuum heads and identified by the vacuum switches and hands are removed from the light curtain, after which the advancing system automatically pushes the two loaded switches forward, at the end shuttles two over and pushes two back. The parts are pushed over an aluminum plate with wear strips which are precisely controlled for temperature. Load and advance stations, test and calibrating head and reject, and eject chutes are secured by a light curtain.