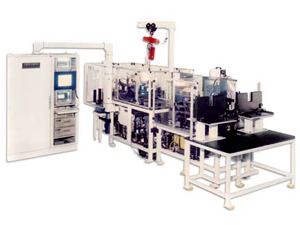 This is a high-speed SIP resistor network processing machine. The operator loads tinned strips of SIP resistor networks into magazines, which are loaded onto a rotary index table. The machine removes the top strip from the rotary table, and places it into a straightening die, to repair any bend leads. The first half of the machine cuts the individual SIP packages free from the carrier while trimming the leads to a pre-set length. This dimension is referenced from the standoff bump, shown in the pictures above and is held to a tolerance of +/- 0.005″. Once the SIP’s are separated, they are fed by vibratory inline feeders to the second half of the machine in two rows.

Where they are tested electrically, vision inspected, and straightened at over 200 parts per minute. The second half of the machine is almost entirely cam driven, to ensure correct timing at these speeds. The inspection of the laser marking described below is done on the fly, using a strobe light. The finished parts are then loaded into tubes, either side by side, or end to end for shipping.