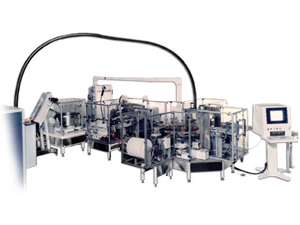 The film is fed from a roll, pulled through a welding station and pushed through a cutter. Four Disks are fed from a vibratory feeder into a cross shuttle and moved under the weld head. The cross shuttle becomes the lower weld die and the disks are RF welded onto the film with a 2 KVA welder. The completed Disk/Film assy’s are then fed to the Final Assy Machine on a belt conveyor.

The Window to Housing Assy Machine receives Cassette Housings from a vibratory feeder bowl and bulk hopper. They are fed one at a time into a 12 station rotary turret. A narrow roll of film is fed into the window punch station and a small circle of the film called the window is punched and dropped into the Housing. At the next station, the window is RF welded to the housing with a 2 KVA welder.

Next, the operator loads a completed Disk/Film Assy into a vacuum nest and it is transferred to the upper weld electrode then placed and RF welded on top of the four Housings with a 10 KVA welder. At the final station, the four separate Cassette Assy’s are die cut and stripped from the scrap strip and discharged onto a conveyor.