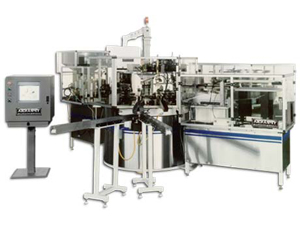 This is a fully automatic system used to assemble the four parts shown into a Surgineedle. The Surgineedle is one of the tools used by surgeons while doing minimally invasive surgery. The operator loads the Needles into a stepper driven magazine bank that transfers one row of needles at a time into a linear vibratory feeder. The Needles are then picked up and placed into a spring loaded nest on a cam operated rotary index table. The machine uses a cam operated upper tooling plate above the indexing turret to provide the vertical motions for all of the stations. The horizontal pick and place motions are provided by ADAPT standard air driven slides mounted on the upper tool plate.

At the next station the Spring is fed from a vibratory feeder bowl, escaped and blown down a tube to a staging area. Once in position it is dropped into the Needle when the upper tool plate moves down over the nest. The Spring is probed at the next station to verify that it was loaded successfully. The Stopcock is fed from a vibratory feeder bowl into a vibratory inline feeder. The Stopcock is loaded by a separate cam operated linear parts placer, driven by the main indexer.